This post is a bit tongue-in-cheek since I have already blogged on this topic during last year’s Wimbledon where the British press was all in a tizzy about Andy Murray’s new training regime – a key part being building his biceps by doing chin-ups with a weights attached to a belt around his waist.  I pointed out the irony of the press reporting on his newly powerful 127 m.p.h. serves, while on the same page reporting on skinny Venus William’s setting a tournament record with a 128 m.p.h. serve.

One of the major points for squash coaches is that a player’s success can often be in spite of and not because of a given training activity – and that often there are unseen or unspoken factors involved that contribute to a player’s success.  The same of course would apply to squash coaches – if our players are being successful it does not mean that everything we are doing with them is contributing to their success.  For example the type of drills we do with them may have a negligible effect on their game, but our charismatic leadership style may be propelling them upward to unseen heights!  Without a careful and critical dissection of all training activities by coaching experts it would be difficult to determine.

In the case of Andy Murray, the use of intensive, upper body strength training methods was coincident with a new determination and focus to improve and achieve, this resultant attitude being mostly responsible for his rise in the tennis rankings (will he win the Australian Open?).

In the case of squash, it is even more clear that the size of the biceps (i.e., upper body strength) is irrelevant to both hitting the ball hard and a player’s squash ranking.  A prime example of this would be a casual inspection of John White’s upper body – John holds the official world record of 172 m.p.h. for a squash drive.  The average weight of the squash racquet is now about 140 grams unstrung, while the average tennis pro’s racquets are over 300 grams. 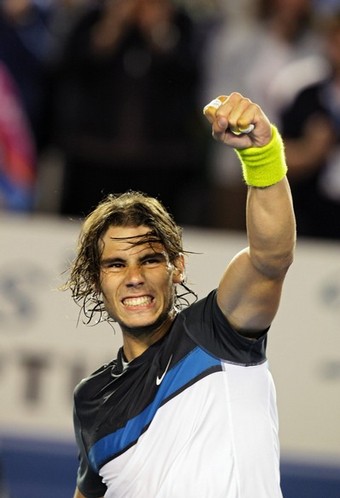 Certainly in the men’s game muscularity is not a significant factor, considering that the men usually hit harder than their female counterparts who often appear more cut with respect to this aspect of fitness.  Hitting the ball hard in squash is mostly a result of biomechanical factors such a lever length (e.g. John White), pre-impact prestretch, swing length, good technique (especially the kinetic chain) and of course timing, which is a result of movement and positioning, which is related to aerobic fitness and speed/agility. Hopefully the recent promotion of functional training has sounded the death knell on emphasizing traditional weight-training methods such a biceps curls, triceps extensions, squat with heavy weights and the bench press.

This entry was posted on Saturday, January 24th, 2009 at 5:54 PM and is filed under Biomechanics, Physical-Physiology, Technique. You can follow any responses to this entry through the RSS 2.0 feed. You can leave a response, or trackback from your own site.