Back in the late 70’s and 80’s top squash was seen primarily as an aerobic sport, with intermittent bursts of speed and power.  Tales of Jonah Barrington’s and Geoff Hunt’s attritional matches were of legendary status – and I was there in Toronto when Jahangir Khan effectively dethroned Hunt by grinding him down to the point where he literally could not move (I think he also threw his racquet for the first time if my memory is correct?).  I regularly went on six to 10 mile runs, and for several years worked my way up to 24, four hundred metre intervals at the start of every season.

Amongst our Toronto group, there was talk of New Zealand’s Murray Lilley (working in Calgary at the time?) going out and running a 2:23 marathon with little or no specific running training (over and above what he would do for squash).  At our Squash Canada National Team Training Camps (I was there as the mental training consultant), players such a Jamie Crombie, Gary Waite, and Dale Styner were all pulling VO2 Max scores in the low to mid-seventies, which were equivalent to the Olympic Marathoners at the time.  (Note that these scores might be due to misguided training and tactics versus the actual demands of the game and “smart” tactics).  My opinion at the time was that the physiological profile of a top player was very similar to that of a 10K runner. 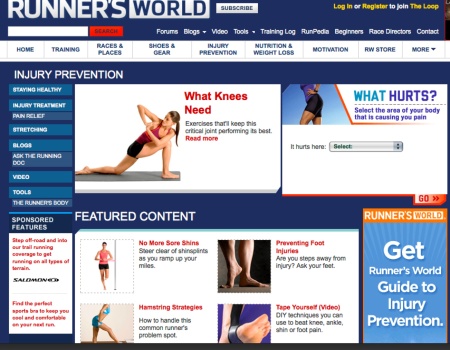 With the change to PAR scoring, a lowered tin, and the concommitent change in tactics to a more attacking game featuring shorter points (at least on the men’s side), there has been more talk of squash becoming a speed-power sport, built upon a solid aerobic base – perhaps closer in physiological profile to a 5K runner. Despite these changes, squash is still the racquet sport closest to running, both physiologically and in terms of potential for overuse injuries of the feet and legs – which leads me to the point of today’s post.

The Runner’s World website has a great section on injury prevention – that features remedies and preventative advice for all of the most common chronic squash injuries:  illiotibial band syndrome, sore knees, sore hips, etc.  Again I make the point that it is not sport science knowledge itself which is the key issue – but having access to the information is a very practical user-friendly form (electronic, easy to read, easy to distribute, etc.) – the Runner’s world website meets all of these criteria.  There is also a great section on designing aeerobic workouts which would still apply to squash training – my advice is to focus on the 5k versus 10K and marathon training workouts.  I remember that my co-worker Heather MacKay (we both were club pros for the same company in Toronto) never ran more than 2 miles as part of her training. There are some sections of the website which require a paid subscription, but many of the aspects useful to squash coaches are free.

This entry was posted on Sunday, April 12th, 2009 at 8:37 PM and is filed under Physical-Physiology, Sports Medicine- Injury. You can follow any responses to this entry through the RSS 2.0 feed. You can leave a response, or trackback from your own site.