Periodization of Squash Training – The Key to Coaching Success!

I was lucky enough to be part of  small group of Canadian squash coaches were amongst the first coaches (in all sports) in Canada to become certified as NCCP Level 4 Coaches (1989).  In Canada’s five-level Coaching Certification program, the Level 4/5 program targeted National and Jr. National team coaches (it is now a requirement to coach a Canadian National Team).

At the time, a coach needed to accomplish 12/20 tasks to be certified at Level 4. The passing of the 8/20 remaining tasks, mostly “administrative” or “supplementary” (e.g., Sport Systems) would lead to a Level 5 certification.  The program has since been revamped somewhat, moving away from the 20 Tasks format: 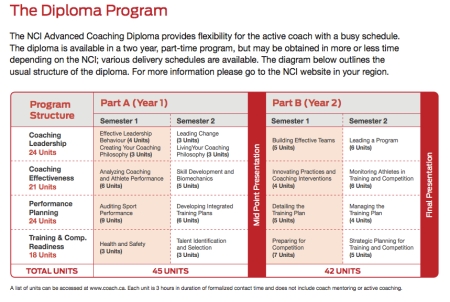 Each task consisted of a day or day and a half workshop lead by a sport scientist with expertise both in squash and the academic area of the task. Evaluation consisted of submitting a practical project demonstrating competence in the area, graded by the sport scientist presenter.

I have been a Squash Canada Level 4 presenter for three tasks:

I have also presented Task 7: Psychological Preparation for Coaches, at several National Coaching Conferences (in both English and French:).

Periodization is a comprehensive (technical, tactical, physical, mental) system of planning sports training based on theoretical principles and empirical findings that originated in the eastern Bloc countries in the 1960’s, but is now used as a planning tool in all developed countries and sports.

Unfortunately, if you Google the term, you will likely only find strength training and bodybuilding programs and studies that are limited to the “physical” domain – a classic example of “experts” trying to exploit the popularity of a new term, without fully understanding the “big picture”.

Our 1987 Level 4 course was conducted by then Jr. Men’s National Coach Rene Denis, who had been working closely with periodization guru Tudor Bompa to develop a “periodized” coach’s training diary.  The importance of this task was that the squash coach was forced to integrate all of their training knowledge into one harmonious plan where all of the different parts where “perfectly” coordinated to assure maximum benefit for the athlete.  There is almost no published work (except on this blog) on the periodization of squash training, and very few coaches use periodized plans.  Here is an example plan I presented at the 2007 WSF Coaching Conference:

In Canada, periodization was also taught to coaches of all sports as part of both the NCCP Level II (season plan) and Level III (annual plan) theory programs. To be fully certified a coach had to take this theory component along with a Technical and Practical component that was organized by their national sport federation.  So for ten years (1992-2002) I taught periodization to thousands of coaches from all sports.  Following each course, the coach had to submit their seasonal or annual plan for grading, along with examples of smaller planning units (macro-cycle and micro-cycle plans).  I also taught periodization of squash training to several generations of coaches though the Princeton Squash Coaches Academy – something we do not do anymore. 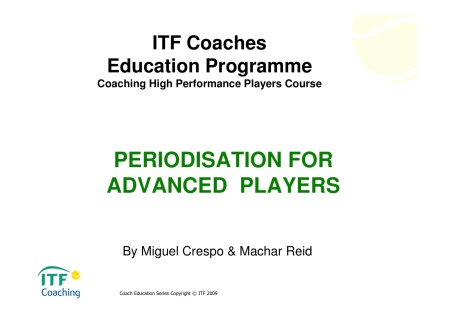 Due to this lack of resources, if you want to learn how use periodization to organize your squash training, your best bet is to access the International Tennis Federation’s publications on periodization of tennis (Just remember to spell “periodization” as “periodisation” – they have a Spanish head of Coaching:).  Although the ITF has been a latecomer to periodization, they have an excellent Education Department, and their resources are practical and easy to read – here is a good available download:  Periodization for Advanced Players (ITF, downloaded March, 2011).

Here is a poster of my presentation at the last ITF Coaching Conference in 2009 – periodization of mental training for each stage of an LTAD:

1.  Use a periodized approach to planning your squash training year.

2.  Adapt tennis resources to squash if there are no suitable squash resources.

This entry was posted on Wednesday, March 30th, 2011 at 2:55 PM and is filed under Planning, Tactics. You can follow any responses to this entry through the RSS 2.0 feed. You can leave a response, or trackback from your own site.