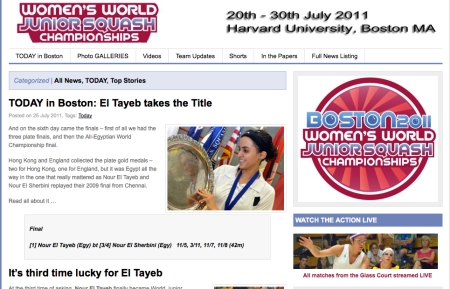 If you are just joining us for part three, you may want to check out my first 2008 post on this topic – and last week’s post.  To make a long story short (read the previous posts:), if all squash coaches (and squash countries) have access to the same information why do some countries (in this case the Egyptians) outperform others (in some cases with much greater resources?

In the interest of brevity, since this topic could consume an entire weekend coaching conference, I am going to make my points, some of them hypothetical of course, in bullet form.  Please feel free to leave a comment below!

I will just add that my comments are based not just on my personal observation of the Egyptian’s (and their opponents), but on my entire consulting and coaching experience which include not only a Men’s Squash World Champion (Jonathon Power), but an Olympic Gold Medalist (tennis’ Sebastien Lareau), and several other World Champions (Jr. tennis, Canadian National Racquetball Team, etc.).

I do believe that it is possible for other countries to catch the Egyptians, but it will not be with the current crop of adult players – it will have to be with those who are now 8-12 years old (a “golden” age of learning) with a revamped squash coaching philosophy – which probably means 2020:)

ps.  I do not think this is incongruous with the LTADs – on the contrary – an LTAD that integrates these notions will be very effective.

This entry was posted on Tuesday, July 26th, 2011 at 3:03 PM and is filed under Juniors-Development, Leadership, Planning. You can follow any responses to this entry through the RSS 2.0 feed. You can leave a response, or trackback from your own site.

One Response to Developing a Squash World Champion: Part 3