Although squash is played in 153 countries around the world, it is not as well developed as some of  the world’s more popular or richer sports like soccer or tennis.  A small, well organized group of dedicated squash coaches (e.g. currently the Egyptians) can develop world class players, and even a world champion. If we look at the recent history of the squash world rankings, we can see that there is quite a bit of movement near the top of the rankings on both the men’s and women’s side in terms of the players’ nationality.  We also see a lot of successful solo efforts that cross national boundaries such as Liz Irving’s (Australia) coaching of Nicol David (Malaysia).

In terms of sheer numbers in the top 100, the English dominate simply because of greater numbers and government related money that is put into player development (more than any other country).  You can read this post to explore the economics of developing champions.

In order to achieve sustainable results, squash nations need to take advantage of the advances in sport science. This means using a system where the coaching certification program and actual coaching programs used in squash clubs are in perfect alignment with  a nation’s comprehensive Long Term Athlete Development (LTAD) system: 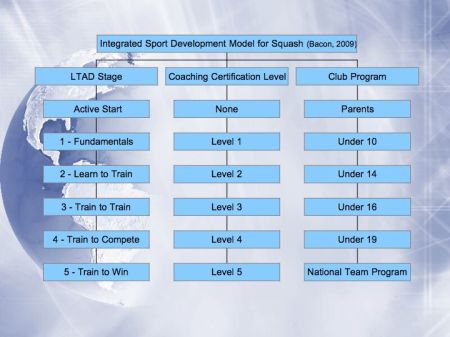